It’s funny that one of the top Google searches that end up on this blog have something to do with Sachlav pointing out to the post entitled: From Rompope to Eggnog to Sachlav

This winter I’ve had a chance to have a nice and warm Sachlav featured below. No Rompope or Eggnog this year either.

It was really good with its coconut and nuts on top.

This winter has basically passed by just like a Sachlav: warm, very sweet indeed and with just a bit of some hard pieces.

Warm – Not much cold this winter and unfortunately not much rain either although the last two weeks some rain has come down.

Very Sweet – It has been great to have family visiting and sharing some time and Chanukah with us. Celebrating Hanukah in Israel was once again a unique experience.  Below some highlights (feel free to click on the Chanukah 5771 link for more pictures).

And some of the sweetest moments this winter (I guess it was much before winter), G’d has blessed us and we will have our first Sabra.

He is so photogenic :)

Take a look, click on the image below. (Some Spanish is required) 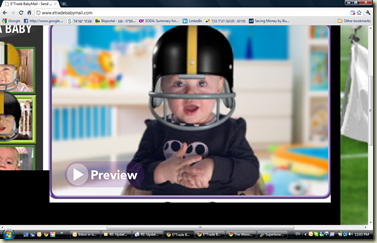 Sincerely the Chairman of the Mexican Steelers Fan Club in Israel

As always sorry for the sporadic blogging.

Lots of things and events going on lately. I’m thankful for all that I have received and pray for peace, health, life, happiness and sustenance.

Going to the beach in Israel is as fun as any other beaches but in addition it is a great and unique cultural experience.

Something unique about Israeli beaches are its lifeguards. They come as sabras as it can get. Their job is to safeguard the physical and moral integrity of all of us, beach visitors. However what is unique about them is their style and approach that is an art as much as it is a science.

Hearing their sweet voices through their megaphone harmonize with the sound of the sea as they approach to visitors saying for example:

(authors of these poems will have to excuse my loose translation)

“LADY WITH THE WHITE HAT, HOW MANY TIMES DO I NEED TO TELL YOU TO LEAVE THAT FLAG ALONE?! DON’T YOU UNDERSTAND WHAT I’M SAYING?”

“HEY, YES YOU! GET CLOSER TO THE SHORE! DO YOU WANT ME TO COME DOWN AND GET YOU?”

Below a photo of what their booth looks like. Look close at the picture. The red flag on top indicates it’s dangerous to swim. And now look closely to the things hanging outside.

The shorts read “Lifeguard”, it indicates that the lifeguard is inside the booth, and you don’t want him to come down and get you. :)

And below a couple of pictures from typical Israelis spending some good time at the beach.

Following my passion for music and in continuation to my concert reviews I wanted to share with you a great concert experience I had some months ago.

Rajel was so kind to invite us to a great concert right in Jerusalem’s gan saker. We went to see Shlomo Artzi.

Shlomo Artzi is kind of an Israeli version of Bruce Springsteen. In fact I did some research and they were both actually born in 1949 a couple of months apart and they both have 3 children. In terms of albums sold they stand 1.5 million vs. 185 million (guess who’s got what?), OK they are not really comparable, but somehow they have many similarities. They both have very poetic lyrics, both are loved by the mass and have had a very long musical career.

I have been listening to Shlomo for a very long time. I might owe him a lot for my Hebrew as much as I owe the Beatles for my English (although I think the Beatles did a better job).

More than two years ago we had tickets to see Shlomo and that same day I had a fever. I guess it was from excitement :), so it had to wait for two years to see him.

The concert was in an open park, we brought our picnic carpet which helped us keep a “private” area as well as some snacks. The concert started and it was very exciting to see Shlomo. He is a very good showman and artist, however he is definitely not at the peak of his career.

Shlomo makes very interesting arrangements to his well known songs that make his old songs once again modern, however many times during the concert he started to recite instead of singing, again and again and again. It’s clear that his voice is not what it was, and quite possible that there was some alcohol influencing his performance as well (but not confirmed).

All in all it was a great night and a great concert. Below some photos an a very short video of the concert.

The story does not end there. A couple of weeks ago we went to a great musical play.

It was called לילה לא שקט (Restless Night) and just like Mamma Mia is to Abba, “Restless Night” is to Shlomo Artzi. It was a very entertaining play and put together very nicely at the Cameri theater in Tel-Aviv, all based and inspired by Shlomo Artzi’s songs.

Apparently there were a couple of famous actors, however we are still not familiar with all the Israeli celebs., nevertheless we did recognize the girl from Kochav Nolad (Israeli version of American Idol). If they would have sold a CD of the show I would have bought it, I guess I will have to wait to see if it gets to Broadway to buy the CD.

If you want to read more about concert experiences don’t miss:

The Woodstock Revival in Jerusalem

A Night at the Party – Mashina Unplugged !

From Toyota to Alan Parsons Project

And by the way, the rumors and news of U2 and Coldplay in Israel for Summer of 2010… well… I guess they are not coming anymore even though the weather still feels like summer.

I hope to soon attend more concerts to share with you.

It’s back, and it's better than ever!

Hi loyal readers.
By now I might have lost most of you, but I want to announce that the blog is back and better than ever. With sooooo many things to write that have been going on for the last couple of months. (I don’t promise on updates as you were used to, sorry I cannot keep the pace).
I don’t even know where to start: The greatest Aliyah for us after our own, my parents visit, the high holidays 5771, the Shlomo Artzi concert, a couple of birthday parties, the Bnei Akiva of Mexico reunion in Israel, our recent visit to the Knesset (Israeli parliament), and many more adventures.
So lets get started…
As you can see the Aliyah regressive clock reached to zero, we are so happy and lucky to have my in-laws in Israel. We are very proud of them and wish them lots of success in their Klitah and all the things that will start to take shape. I can already see how they are enjoying it as well.
Welcoming them at the airport was very exciting for all, we could not believe that they were already here. Below are some pictures from their arrival as well as their citizen ID ceremony in Jerusalem in the western wall digs.

May' G’d continue to guide them through their Aliyah as He has done until now and as He continues to do for us.
Posted by Israel W. at 8:41 PM 1 comments

Now to our new Sabra Album.

Just as I did last year (From Destruction to Love (Peace & Love)) to finish the 9 of Av fast (marking the destruction of the two Batei Mikdash/Holy Temples among other atrocious events in Jewish history) –I went to Jerusalem to the Western Wall. The entire experience was so unique to Israel. Here are some pictures so unique to Israel.

Right after the fasting is over thousands of hungry man and woman rush to this “oasis” to get a free drink, coffee and sweet pastries. Note the separation for men and women.

Now the most interesting part is the drink disposing technology. This is better than any modern refrigerator or any home soda maker, just turn the faucet and you get instantly cold: Soda, Water or Petel (flavored water). Genius!!!

I hope you enjoyed this edition of the Sabra album. Feel free always to comment on my blog. Next I’m planning on a Sabra Album Baywatch edition.

You might have noticed a new countdown clock on the blog. I have decided to keep indefinitely the “Next Family ALIYAH” clock since ultimately I will see you all here. The other clock is for the “Next family visit”.

We are so excited for both clocks that almost reached 0. We are happy to welcome soon our cousin from NY who will be here for a year, and right after that we will be welcoming my in-laws that are making Aliyah and little by little reuniting the entire family. Yishar Koach to you!

With gratefulness to G’d we celebrate 2 years in Israel. 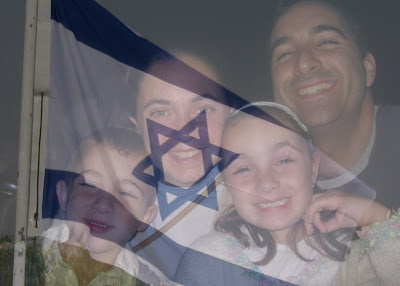 The best is yet to come… 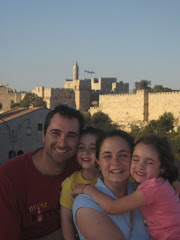 Next Family visit to Israel

Links to Weisser's in Israel